Oil Seals also called rotary shaft seals are widely used to prevent the leakage of a medium (such as oil and grease) along a rotating shaft. It is a mechanical component used to seal in the lubricant, oil and grease being the most common liquid substances found in any power transmission system such as an engine, gear box or electric motor, but also seals all general liquid substances. It isolates the moving parts that need to be lubricated and prevents them from running dry and seizing.
The representative oil seal is the TC oil seal, which is a double-lip oil seal with a self-tightening spring that is completely covered by rubber. Generally speaking, the TC oil seal is commonly known as R23 design.

There are many types of oil seals, TC Oil Seals manufactures and stocks the most commonly used being R23 in NBR/Nitrile and FKM/Viton s shown in the picture below. 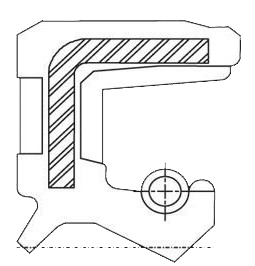 An oil seal has three dimensions, the ID (inside diameter), the OD (outside diameter), and W (width). Normally, a standard oil seal size will be given, ID 20 x OD 30 x W 7 mm, these dimension are moulded into the body of all TC Oil Seals. Therefore part numbers are easy to follow, OSM (Oil seal metric) OSM-20x30x7-R23-NBR for example. 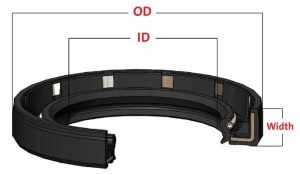